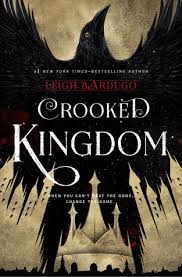 Kaz Brekker and his crew have just pulled off a heist so daring that even they didn’t think they’d survive. But instead of divvying up a fat reward, they’re right back to fighting for their lives. Double – crossed and left crippled by the loss of a valuable team member, the crew is low on resources, allies, and hope. As powerful forces from around the world descend on Ketterdam to root out the secrets of the dangerous drug called jurda parem, old rivals and new enemies emerge to challenge Kaz’s cunning and the team’s fragile loyalties. A war will be waged on the city’s dark and twisting streets – a battle for revenge and redemption that will decide the fate of the Grisha world.

How do I describe this book? Depressing. Amazing. Beautiful. Really, Really Funny. Diverse. I could go on and on. This book broke me. Why did ———– have to die? I know that it had to happen but still. The writing was just as good as the last book. Sometimes I had to get up and pace and hope that everyone was okay when I got back down to reading the book. That is one of the things I admire in an author. Leigh Bardugo has my undying respect.

The characters broke my heart. While reading this book I was imagining what would happen if Rhys and his Inner Circle (ACOTAR) and the Dregs met. That would be very interesting. I really enjoyed Wylan and Jesper’s relationship. I totally predicted that it would happen. I love how diverse this book is. Everyone is different in here. Nothing really matters in Ketterdam besides money. We also learned a bit more about everyone’s backstories and that interested me a lot. Learning more about the Dregs and everyone’s history helped me understand everything a lot more. Who knew that I would ever feel pity for Kaz Brekker. I also felt very bad for Nina at various parts in the story (including that unnamed death that happened). I liked Matthias the best in this book. It was evident that he really cared and he did not deserve what happened to him (despite what certain people think). If you do not like character deaths then this book is not for you.

The plot was very interesting. The plan was always changing and it was very fast – paced. The fast pacing works for this book very well. The multiple POVs worked very well for this book. Especially because for part of the time Inej was separated from the Dregs. I liked how the book ended the way it did because it lets you imagine how things will end up. Will there be another book in this series? That is the one question I want answered. Because if there is I want to know everything. Now. The setting was very clear and descriptive. And probably pretty realistic too. I wouldn’t know because I don’t live in the city. I imagined myself walking around Ketterdam with the Dregs and when I can imagine myself somewhere in a book I know that the setting is written well. I loved this book for everything that it is.

If you have not picked up this book or the first book in the series, Six of Crows, you really should. Please remember to fill out my survey. You can find the link on my about page. Thanks for Reading!!!!! Have a Great Day!!!! -Annalee and Buttons 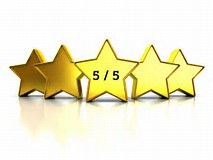