Strange the Dreamer, by Laini Taylor 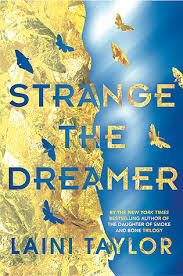 War orphan and junior librarian Lazlo Strange gets an unexpected opportunity to follow his dream of seeking the mythic lost city of Weep with the Godslayer and his band of legendary warriors.

This book was a mystery. If I had thought that The Cruel Prince had a lot of plot twists then this book had ten times more. It was epic!!!! There was lots of questioning about a characters intentions and it was awesome. I think that it could have been done a little bit better though. I also think that the concept and main idea were really cool. Want to know what else I felt? Then read on.

The characters were really cool. Their motives were always changing and it was really realistic. After all, things do happen that change people’s perspective on things. The characters had time to laugh and then plan their next actions. It was really awesome. There was also the normal girl envy (there was only one guy on the citadel). It was very real.

My favorite character was Calixite. She was such a fun character. Her ideas were always bright and full of life. It was awesome. She was really strong and different. She was the only who cared about Laklo during the trip to Weep. She also was the only one of the group to have gotten arrested and laugh about it. So I really like her. She is someone that I would love to meet in real life.

The characters were also really diverse. Everyone was different, in their professions, or the color of their skin, or how they see the world. It was really amazing. And then all of these different people came together to talk about how to do something important to them. It was really very impressive. Honestly, I really enjoyed the characters and how the reacted to the world around them.

The plot was very interesting. I enjoyed how dark it was. There was very little hope in it. I know that I’m probably evil for saying this but, I liked that. The fact that the characters accepted their fate was really cool. At least, it was to me. And the way that everything was told was masterful. You never knew what secret was going to be unveiled next. All of the twists and turns were very interesting and I did not see any of them coming. Real talent.

The setting was also very interesting. Weep was a very interesting city with an interesting past. It was healing and you could see that. You could also see what state Weep would be in if it was fixed and everyone was happy. It was very impressive. I really wish that I lived there. Not when all the trauma and sadness was happening but when everything was happy and everyone was at peace with the world. I also would have loved to visit the Library. After all, it was the greatest library of all time. I want to freaking live there. So if you can find a way to transport me into a book that would be wonderful and I would pay you all the money that I have.

I really did love this book. I think that it was very good even though the plot could have had a bit more depth to it. I recommend this book for anyone who loves a good fantasy. Please remember to fill out my survey!!!! You can find the link on my about page. Thanks for Reading!!!! Have a Great Day!!!! -Annalee and Buttons