Odd and True, by Cat Winters 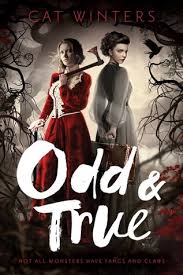 Told from separate viewpoints, Odette returns in 1909 after a two-year absence, promising to rescue her disabled sister, Tru, from the monsters they were taught to believe in.

This book was very good. It was not like many fantasies, which was good because I was getting bored. I really enjoyed the characters, the plot, and the setting. This book was very interesting in a lot of different ways, one of them being the fact that one of the main characters had polio. The characters were the best part of this book. That’s not saying that this book didn’t have a few flaws. If you want to hear more then you should keep reading.

The characters were the best part of this book. I loved the different perspectives and how talented they both were. They both made their own future and told others that they could do it as well. I loved them both dearly and hope that they all have happy futures. I also liked that Tru had polio and didn’t let it get her down. And then she decided to tell another girl who had polio that she could do anything. The characters changed a lot over the book and I think that they would make great role models for anyone.

My favorite character was Odd. She was such a strong young woman and I felt like she could be anyone in any time period. She was just lucky enough to be in a book. I enjoyed her dialogue and the way that she talked about the monsters. Her chapters were my favorite from the very beginning. She was always very down to Earth and could be counted on to think rationally. I hope that she and Tru have a happy future, hopefully with Trudie.

The plot was pretty good. It was intriguing and I was invested in it from the very beginning. I never knew what was coming and was constantly surprised. I think that the plot could have been a little bit faster but all in all, it was okay. It was slow in the beginning but it gradually sped up. The book was split into two parts, Tru’s part, the present, and Odd’s part, all the events in her life leading up to the time the book started. I loved the way that information was revealed. I didn’t know what was important until it was mentioned later. All in all, the plot wasn’t bad.

The setting was the worst part of the book. I’m not saying it was bad, I’m just saying that it wasn’t as good as the rest of the book. The backstory was explained very well, all through Odd’s chapters and that was what really invested me in the story. I loved how descriptive the backstory was, I only wish that it had been that good in the rest of the setting. I think that the setting could have been better, but not by much.

I enjoyed this book way more than I thought I would, but enough to push it into the 5-star region. I highly recommend it. Please remember to fill out my survey. You can find the link to it on my about page. Thanks for Reading!!! Have a Great Day!!! -Annalee and Buttons